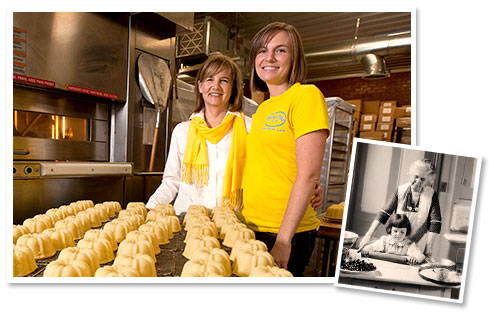 When customers walk into Janie’s Cakes, they wont find the shop’s namesake hidden in a corner office. That side of the cake business never appealed to Janie Clapp, who is celebrating 10 years of selling all-natural pound cakes.
Janie is more likely to be donning a hair net and monitoring the freshest batch of cakes from the heart of her store on Front Street in Tyler.
The new year marks the return of the only seasonal cake in her shop: “the More Amour Jane” is a chocolate pound cake that will only be available through about Mother’s Day. Janie says the popular Valentine’s Day item is just one of many specialty pound cakes she cooks up with her daughter and business partner, Katherine Crow. To call it a family tradition seems a bit of an understatement.
“Our whole family has been cooking and baking since we were both children,” Janie says. “…I guess when you do something you just love doing, all of the sudden you turn around and 10 years later, here we are.”
But Janie’s journey didn’t begin 10 years ago. Long before she switched to making only pound cakes, she was known for her custom wedding cakes. She began selling made-to-order creations in 1987 with a mantra she lives by today: use the best ingredients available and give the customer the best product you can make.
It’s the kind of thing people don’t forget. Janie says returning customers still brag about how they were one of her last wedding orders before the switch to pound cakes. Katherine points out that as she got older, she made some of those wedding cakes too.
“I’ve always been in the kitchen and baking since I was little,” Katherine says. “I would get out of school and be up at the bakery.”
Today, Janie lets the next generation in on the action. She says her grandson, who affectionately calls her “Papu,” often joins her to experiment in the kitchen.
“It’s a great way to keep your family connected,” she says. “We all get in there together. We spend an incredible amount of time in our kitchen. It’s just so fun.”
The joy she takes in her craft shows in the way she manages her business.
As Janie makes the rounds in her shop, she cracks jokes and catches up with every employee she finds. Even when she is in the office she shares with her daughter, the cake-crafting duo look on through a giant window at a vista of machinery and shipping boxes.
The disconnect that sometimes exists between business owners and the gritty work of the factory floor is nowhere to be found – just like any trace of artificial flavoring or dyes.
“We have this neat dynamic as a team and these great employees that work for us,” Katherine says. “…It’s like we’ve become this family. We all know about each other and each other’s kids.”
Janie says their model may be unusual, but there’s a method to her madness. She says the precision and attention to detail required to meet her customer’s standards means a lot of work goes into each cake.
“We make cakes the old-fashioned way,” Katherine says. “Which is making something from scratch – literally finding each individual ingredient to produce into one product.”
It’s a philosophy they take seriously, from using eggs produced locally by the family’s hens to the choice of natural ingredients Janie is “very particular” about.
It may be one of the few subjects that turn the ever-present smile on the baker’s face to a look of sincere determination.
She admits her habit of rejecting the cheapest and most preservable ingredients can sometimes complicate recipes.
She jokingly described the challenge of making a red velvet cake without artificial food coloring.
After reaching out to friends, Janie and Katherine decided to try natural beet powder to give the cake the classic red color.
It seemed to do the trick, but Katherine says it had an unfortunate side effect: “Your cake tasted like beet.”
They ultimately decided to let their customers experience velvet cake in its natural, golden brown state.
“I’m just real particular about no chemicals, no colors, any of that,” Janie says. “I don’t think we should be putting that stuff into our bodies.”
Perhaps most impressive is that she found a way to make it work.
Janie ships cakes across the country, in addition to selling them at FRESH. Because her downtown location is open 10 a.m. to 5:30 p.m., Monday through Friday, she says these options offer more flexibility and help her keep up with demand. Of course, expanding her reach presented another challenge: making sure the customer gets a fresh cake, even if it’s not purchased in her own shop. Because she doesn’t use preservatives, she says she maintains a good relationship with store owners and practices creative shipping techniques.
It may be a lot of work, but its just another reason she says she’ll never get used to the idea of sitting behind a computer in a corner office.
“That’s just awful,” she says. “That’s just so not me.”

Use left/right arrows to navigate the slideshow or swipe left/right if using a mobile device
Product has been added to your wishlist.
You can view your wishlist by creating or login account.
Please create account through ##customer_email## email
Login Register